Our EXplorer in Andorra

What I discovered this June thanks to www.lovevelo.co.uk was the hidden gem of Andorra. Nestled in The Pyrenees between France and Spain this tiny principality, more known for its skiing offers some fantastic cycling in a sensational setting. With 21 different road routes there is plenty of choice to test your climbing and descending prowess. You will not see much in the way of a flat section. Our trip was organised through Love Velo and British Cycling and we were guest of Andorra Tourism and Sport No Limit Travel (www.sportnolimitravel.com)who acted as fantastic hosts. The 4-day taster Holiday gave us the chance to explore some of the routes on bikes plus check out some of the Hotels and Restaurants available.

Flying into Barcelona, we were transported the 2-hour 45mins journey through the Catalonian Countryside into the Pyrenees and across the border into Andorra and to our Hotel Magic in La Massana. The Hotel although basic was clean, friendly and comfortable and served as a good base for our stay. For our first evening, we were transported the 15min down to Santa Colomba d’Andorra to the newly opened ‘Sports’ Restaurant ‘El Raconet dela Bici’. Set with the historic 8th -12th Century Church and tower as its backdrop we enjoyed a welcome presentation from Jordi Haro from Andorra Tourism and had a fine meal with the chance to get to meet the other 7 riders from UK cycling clubs. As well as the Sports No Limit team of Christina, Luz and Josep.
After we toured the premises which have been set up as a good meeting place for cyclists with a café, outside covered seating terrace and small gym, warm down rooms upstairs as well as the restaurant, complete with hanging ‘pro’ cycling jerseys. This was a pattern we will see over the next few days, fantastic food, flowing drinks, welcoming and friendly hosts keen to show us their accommodation and facilities.

So on to Day 1 into the mountains. After a good night sleep and breakfast, we collected our pre-ordered hire bikes from Viladomat (www.viladomat.com) across the street and off we went.

We were to be guided on our two days cycling by the very friendly Gerard Riart, and his mate (the silent one) both lean, mean cycling machines! Gerard’s lack of English was only beaten by our lack of Spanish/ Catalonian and school French. This didn’t stop some fun levels of communication (“not far now!“) and his joy of seeing us suffer on the climbs! Also joining us was a support vehicle, very handy to fuel up driven by Sports No limit travels Luz and Josep. One of the very few cars we saw on our days in the mountains! Honestly!! 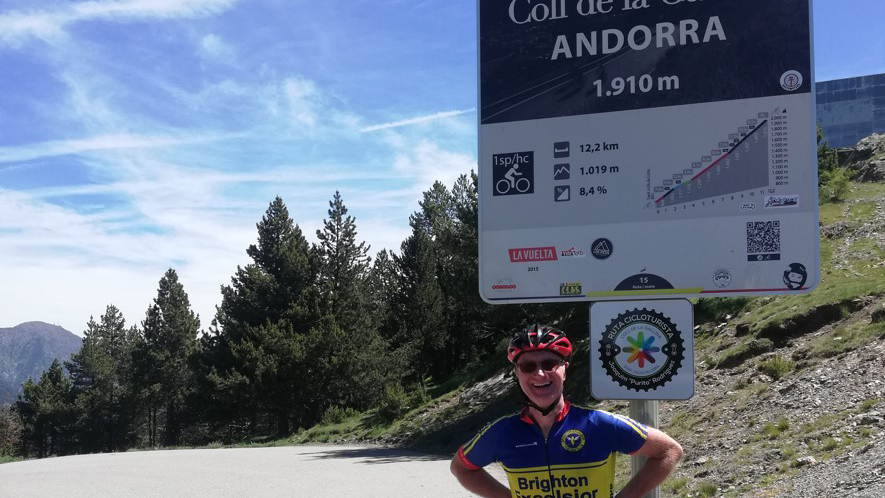 The main route in Andorra is basically a main road through the Country. In the towns rush hour is up to about 9.15am and between 4 and 6pm in the evenings. Best to avoid the main road these times but Cyclists are still given the space on the roads.
As mentioned earlier no flat sections!. New bikes and a gentle start for 2k at 2.5% before starting on first climb of the day, the Col D’Ordino. Coming in at 8.9Km, 451 metres of climbing at average of 5.1% this hour’s climbing certainly gave us an indication of what to expect. Weather conditions were perfect with the stunning scenery a pleasant distraction from the tarmac. Descending (quickly for some!) the 1980m summit we took a break at Mirador Roc del Quer, a suspended 20 metre platform with the statue aptly named ‘The Ponderer’ perched on the end overlooking his domain, Simply breathtaking, a great view of the many switchbacks we were about to do on the descent.

Carefully navigating the descent (fun) we continued into Canillo and out through El Tarter taking a left turn onto a narrow country lane. The 4km section to the end of the tarmac where Gerard took us through the valley with running streams and green Alpine-like fields, again stunning. Enough of this sightseeing! Back in the saddle and onto the next climb. 1796m summit of the Collada de Beixalis was next. At 8.7km 594m of climbing at an average of 6.8% this was a tough climb in the 25 degrees heat. My 18.46 on the 10.9% gradient section not quite competing with KOM Vincenzo Nibali 8.50 effort last September!

The lack of traffic and perfect tarmac roads made the descending fun, even though I was generally out the back, admiring the scenery was my excuse!
So back to the hotel and change for lunch where we were taken to the Anyos Park Wellness Resort.

(www.anyospark.com) We had a great lunch in a relaxed and pleasant white draped outside covered seated area and then proceeded t have a tour of the Hotel. Spread across a large area, his is the place to come for pretty much any sporting activity you wish to do. Everything to an extremely high standard, Spa, swimming, squash, Tennis, Yoga, Beauty, spin classes… Would love to come and stay here, great place for a ‘rest day’ between rides. Bring the family.
Didn’t seem much later than we were out for dinner again. Hosted by owner Albert we had a tour of the 4 star Art hotel (www.m.hotel-arthotelandorra.com) located in the town centre by the river. Again great food. These 3-course meals (with wine/beer) great excuse to prepare for the riding.

So on to day 2 in the saddle. The big climb. La Gallina 1910 metres above sea level, 12.2km long and 1019m of climbing at average of 8.4%. The last 3 k between 12 and 15%. Ouch. Again 25 degrees, beautiful blue skies for the ride ahead. First we had to climb out of La Massana, up the La Comella ascent 8% and down the other side to Sant Julia de Loria.
Just before we started the climb we stopped to look in the biggest and best bike shop I’ve ever been in, Jorma Bikes. With a tax rate at 4%, you’ll get a serious bargain here.

Onto the climb. All I can still see is this relentless road that just keeps on and on, to the next switch back and up, up again. The road narrows at the last section where the gradient gets tougher. Spent most of the climb trying to stay in touch with the three guys in front, never quite managing to get on them! The site of the summit is a bit of a fist-pumping moment for me. Elated, beautiful scenery when recovered even seeing this amazing Eagle swooping in front of us with an enormous wingspan appearing no smaller as it disappeared into the distance.
Thinking this was the toughest of the day we relaxed into the sweeping, horseshoe bends descent exciting to be heading to our lunch stop. How wrong we were. The descent from la Gallina took us back though Sant Julia de Loria and then up to La Peguera (1821) a 13.9km climb at average 6.6%. This was gonna hurt.. And it did. We gained height with the many switchbacks quickly seeing the town disappear into the valley it soon became just us and the surrounding beauty, oh and the gradient! Delighted to have the support car as I needed water and a breather three-quarters of the way up. It was mighty hot. This was tougher than the other climbs, due to having done them already!
Couldn’t have been happier to see the summit sign, especially as I’d cramped up 2k from the summit. Thanks Jack for getting me through it.

Now that was the worst of it. We descending (starting to improve) to our Lunch stop. This was at the Coma-bella (www.hotelcomabella.com) We’d arrived just in time before the kitchen shut to great homemade cooking. My tagliatelli starter, Cordon Bleu and Apple Pie was soon devoured, along with a nice cold beer. A tour of the hotel each room having its own character, offering breathtaking views over the surrounding countryside followed then time to go.
That was it, my first cycling experience in Andorra.

Would I recommend it? Certainly would. What we saw was a stunningly beautiful country with safe and quiet roads in great condition, well marked out for cyclists. Our hosts were exceptional. Never felt more welcome. Everyone proud to show their hotels off and the gastronomy everywhere we went was to a high standard.
Andorra is definitely to be on the cyclists to do list.
Thanks to Jordi at Andorra Tourism
Christina, Luz and Josep at Sports no Limit Travel
And Jonathan and Luke at love Velo
I’ll be back!
Richard Marjoram